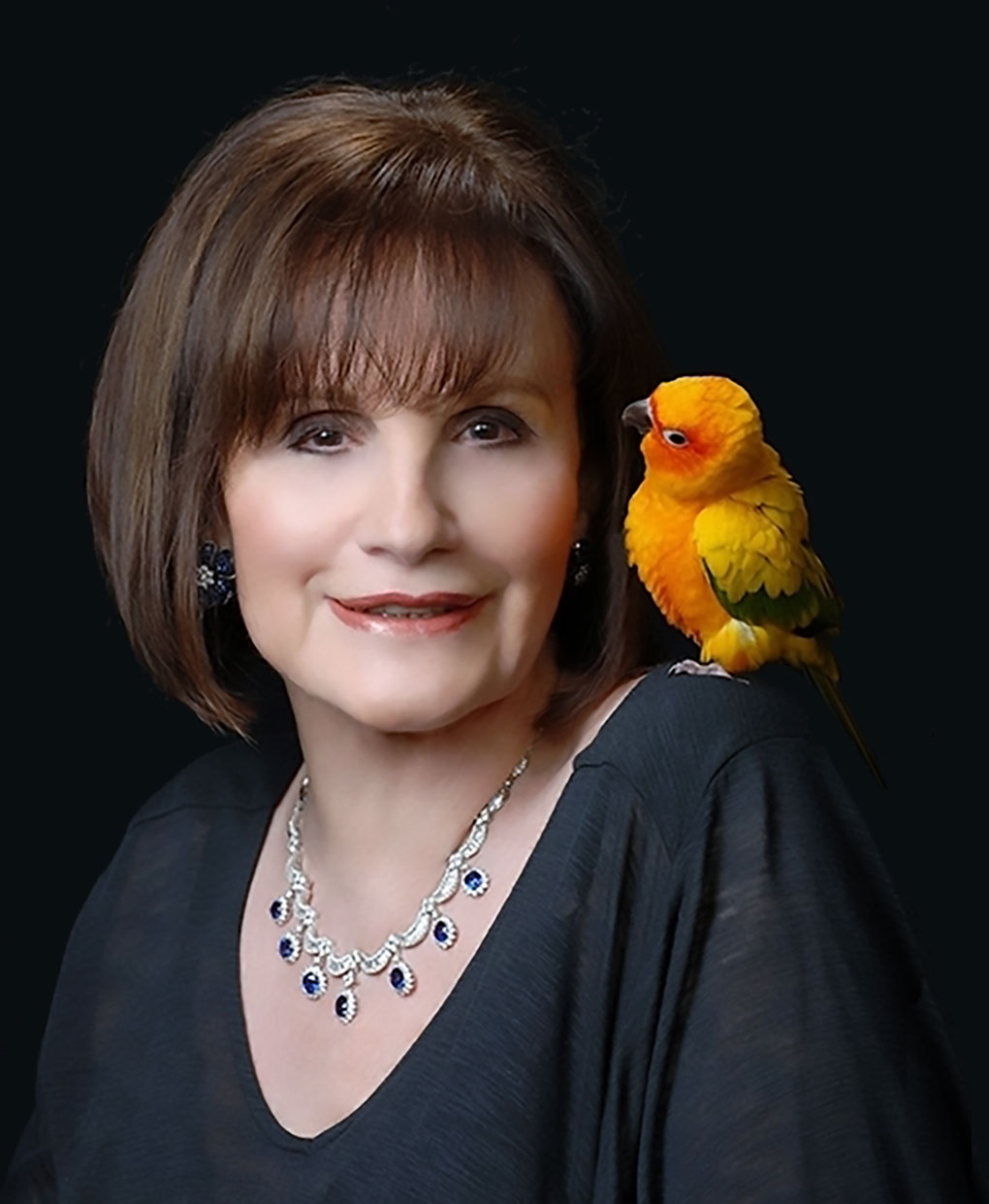 As owner and C.E.O of the former and legendary Al Monzo’s Palace Inn Hotel/Convention Center in Monroeville, PA, Daisy Monzo personifies the great Italian traits of hard work, dedication, sacrifice, accomplishment and total commitment to family. From exceedingly humble beginnings as a child of the Depression Era, Daisy Monzo’s committed hard-fought battle through life and eventual well-earned success and recognition was shaped by the devoted love of her parents, who themselves had to sacrifice all in support of eight children.

At 20 years of age, she met her husband to be Al Monzo. It was eight years and three children later, that Al Monzo Construction Company was founded, and so did the start of a legacy.

While the business successes continued to mount in the contracting business, with Daisy Monzo playing a key role, the couple’s lifelong dream to build their own upscale hotel began to take hold.

In 1957, Al and Daisy Monzo purchased what was then a 13-acre hole in the ground at the corner of Routes 22 and 48 in Monroeville, which would be the eventual home of Al Monzo’s Palace Inn Hotel preceded by Al Monzo’s Howard Johnson’s. Since its opening as a Howard Johnson’s later renamed the Al Monzo’s Palace Inn, the hotel had become a focal point lodging, convention and entertainment complex for over 30 years in Pittsburgh.

Mrs. Daisy Monzo who lost her beloved husband Al Monzo in the year 2000 continue along with her daughter, Michelle Monzo and future son-in-law Mark A. Regan, to oversee multiple business operations, one being the Landmark Hotel until its closure in 2004.

Click the play button above to see the video about Daisy Monzo. 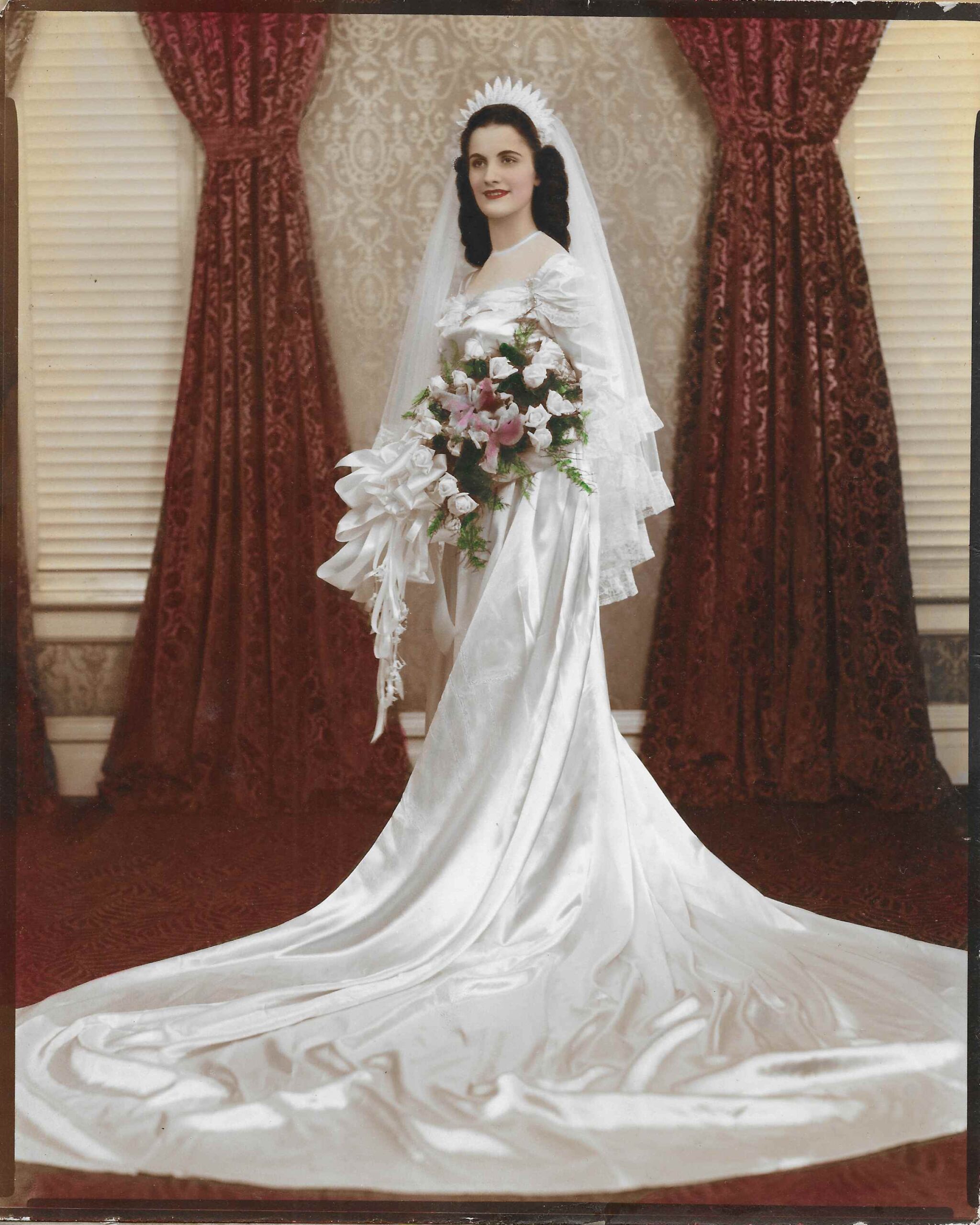 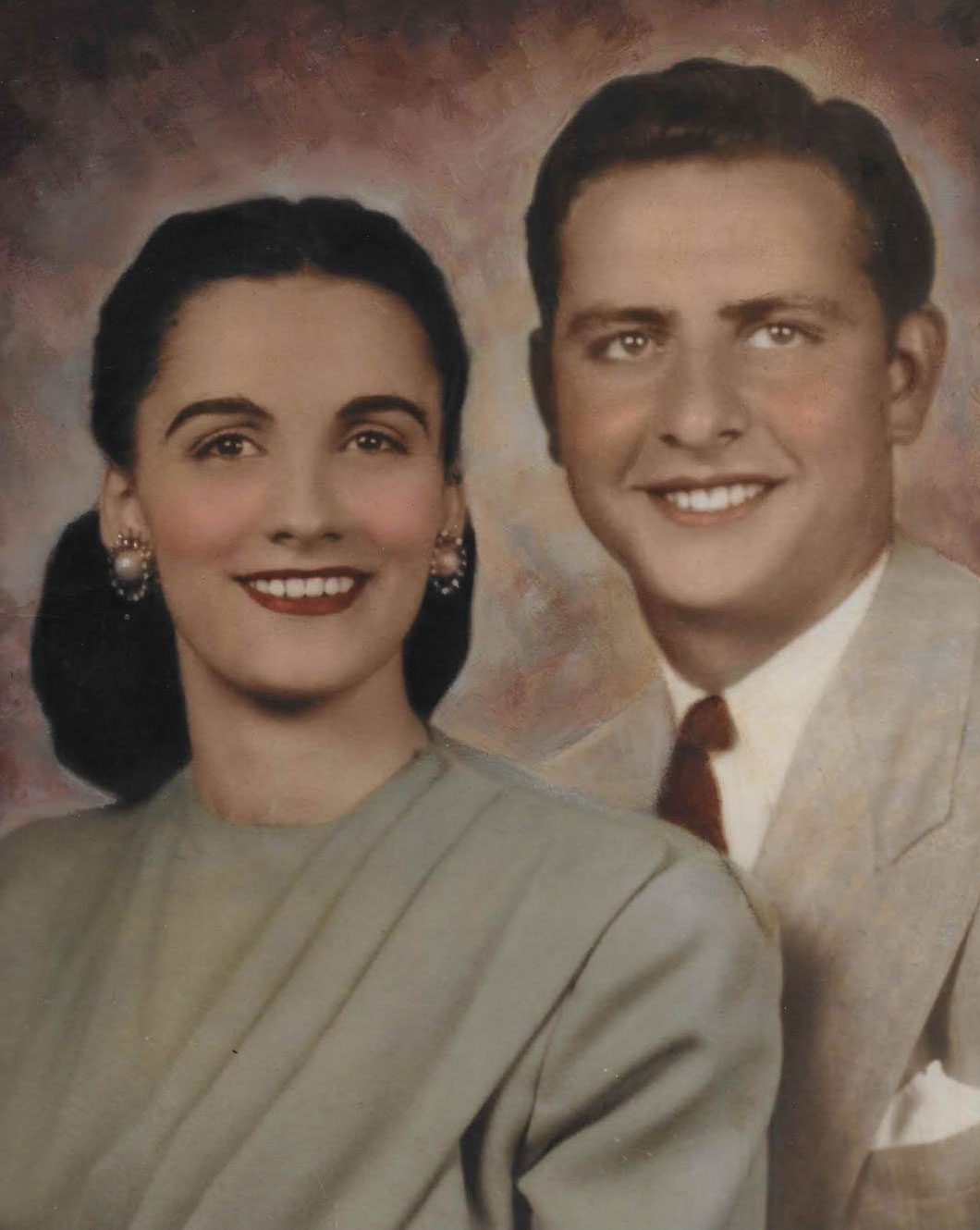 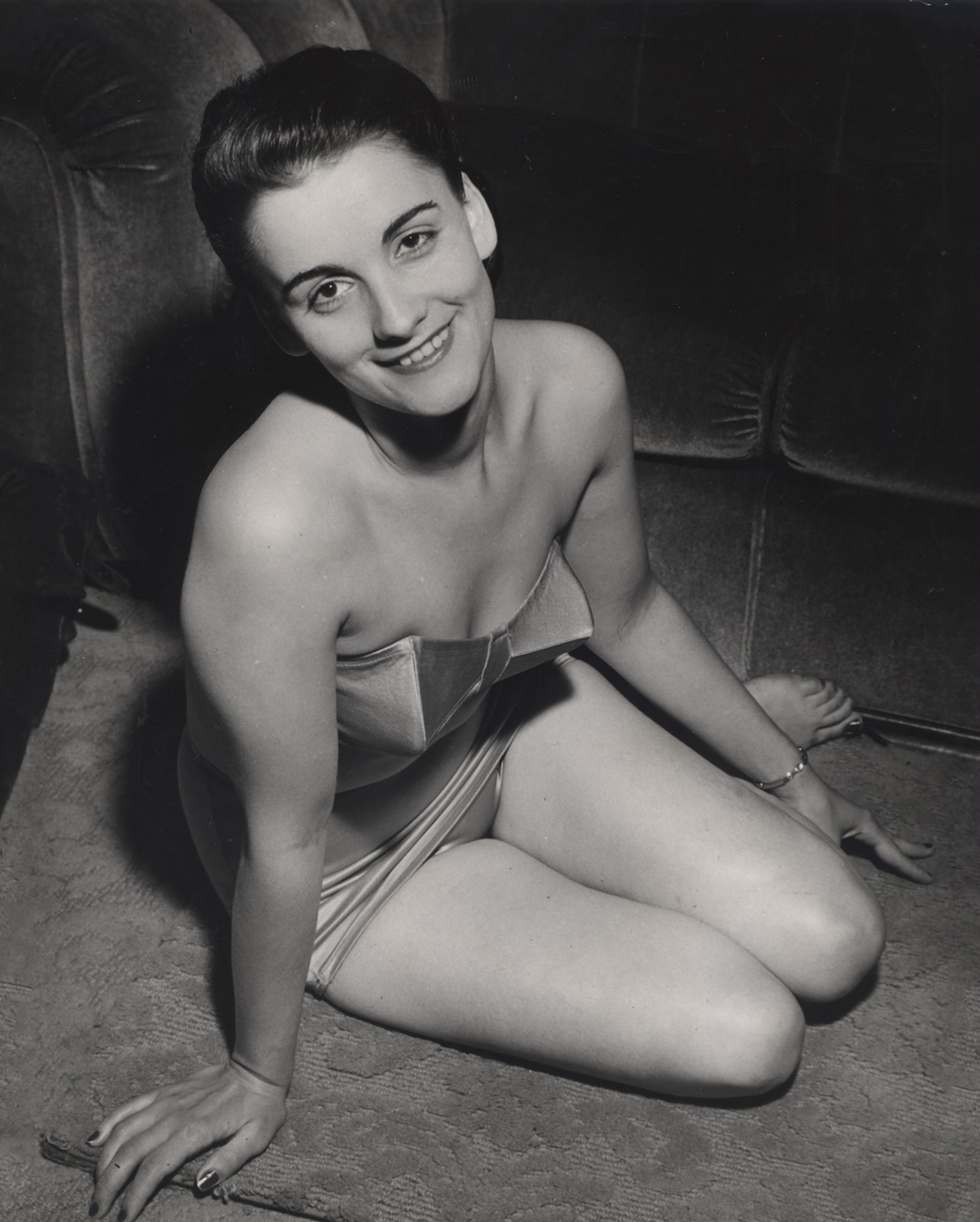 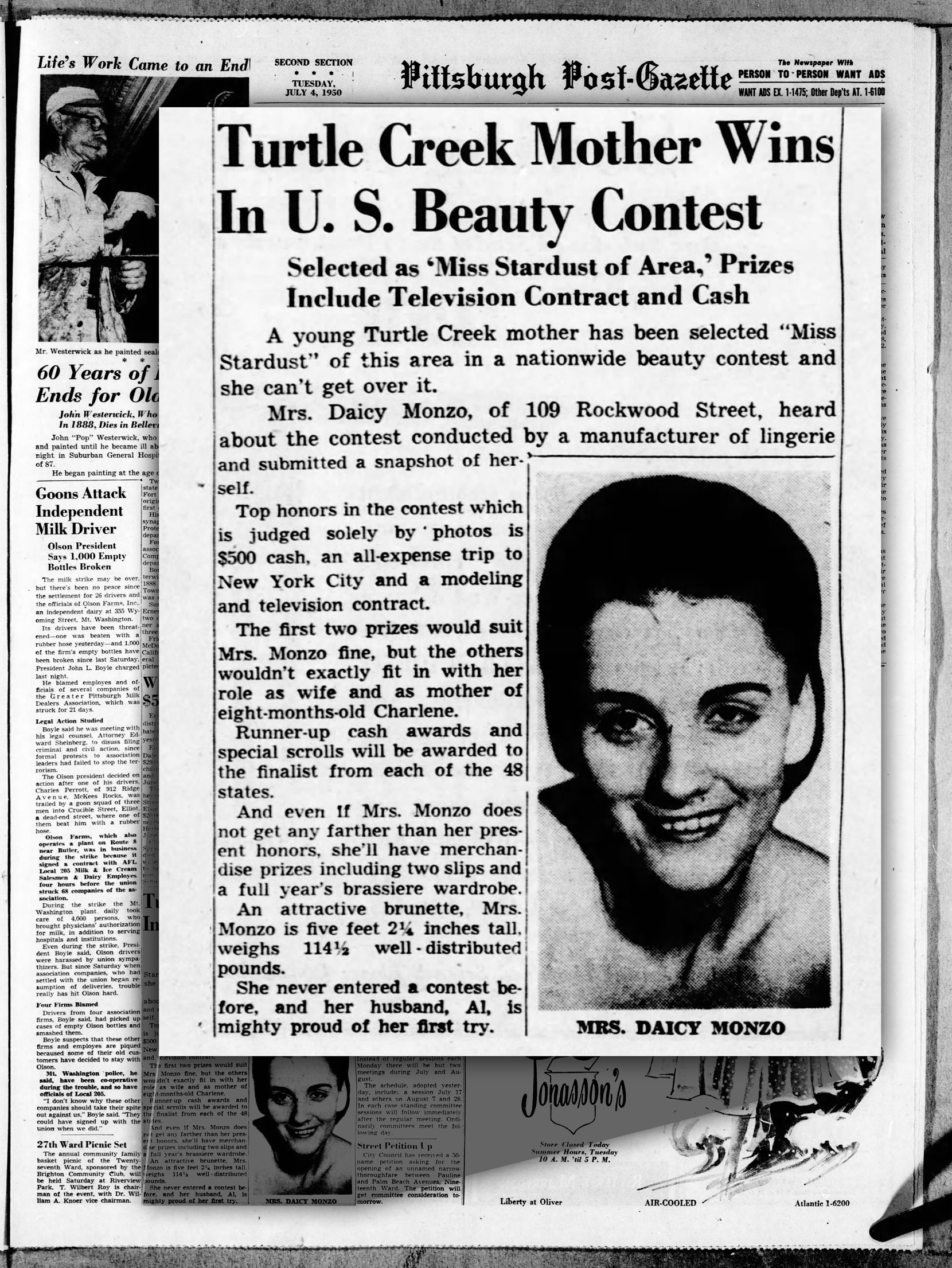 Motorists who complain when they have a tire to change or flat to fix should keep this picture in mind. If you think you have troubles, think of what Al Monzo of Monzo Construction Co. has to go through to change the tracks on a grading tractor. That is a three and a half inch wrench he is using to loosen the tracks. Later, a team shovel bucket is used to lift the old tracks off and lift the new ones in place. Time of operation - five hours, if all goes well. 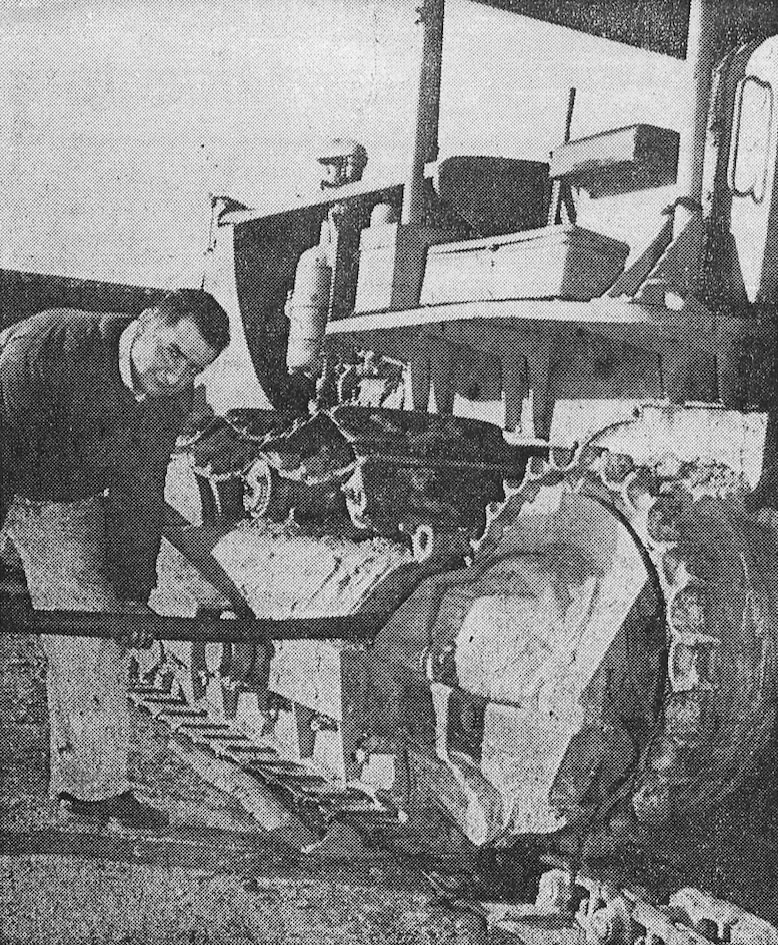 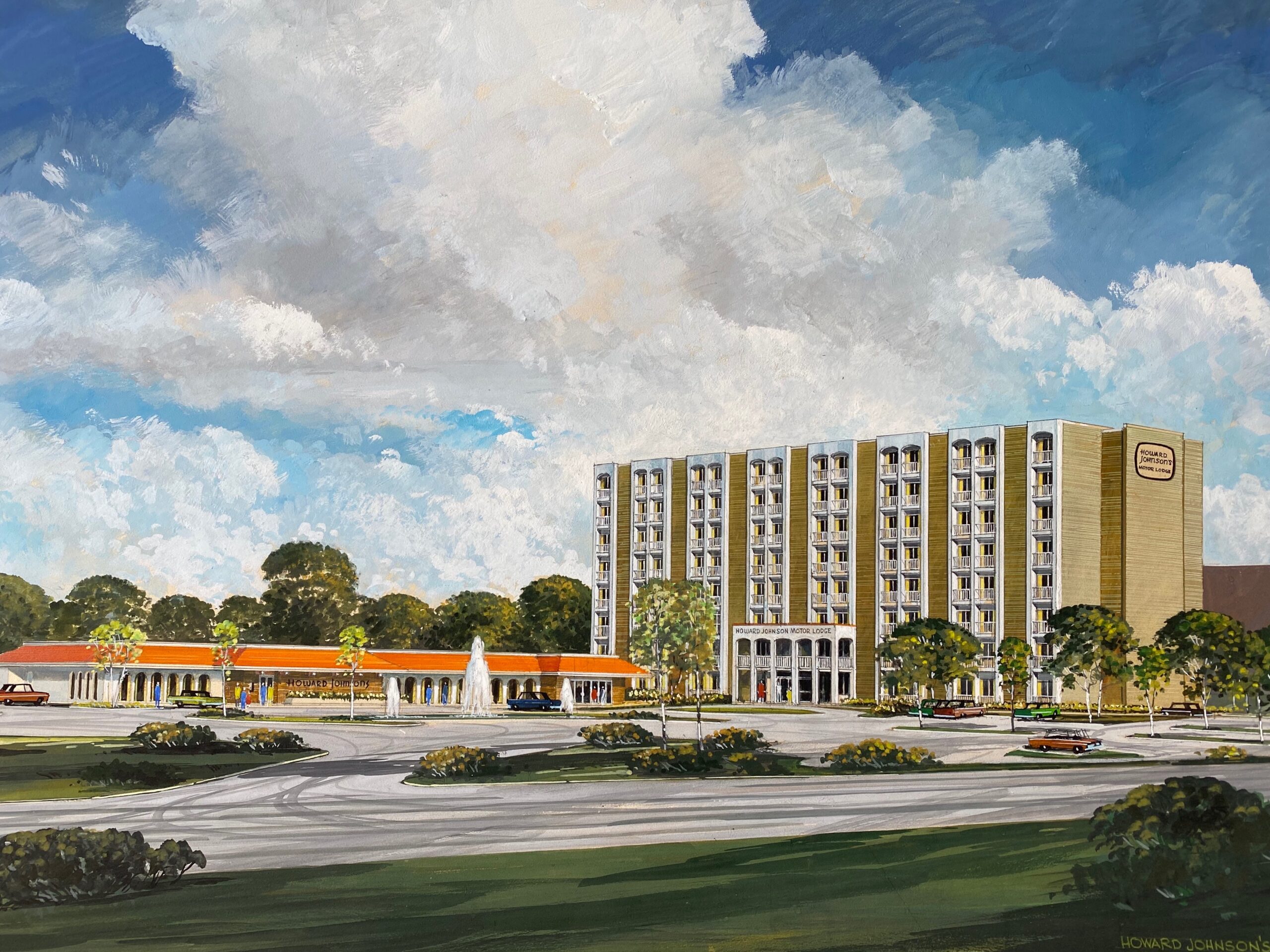 Howard Johnson's, built and opened in 1973 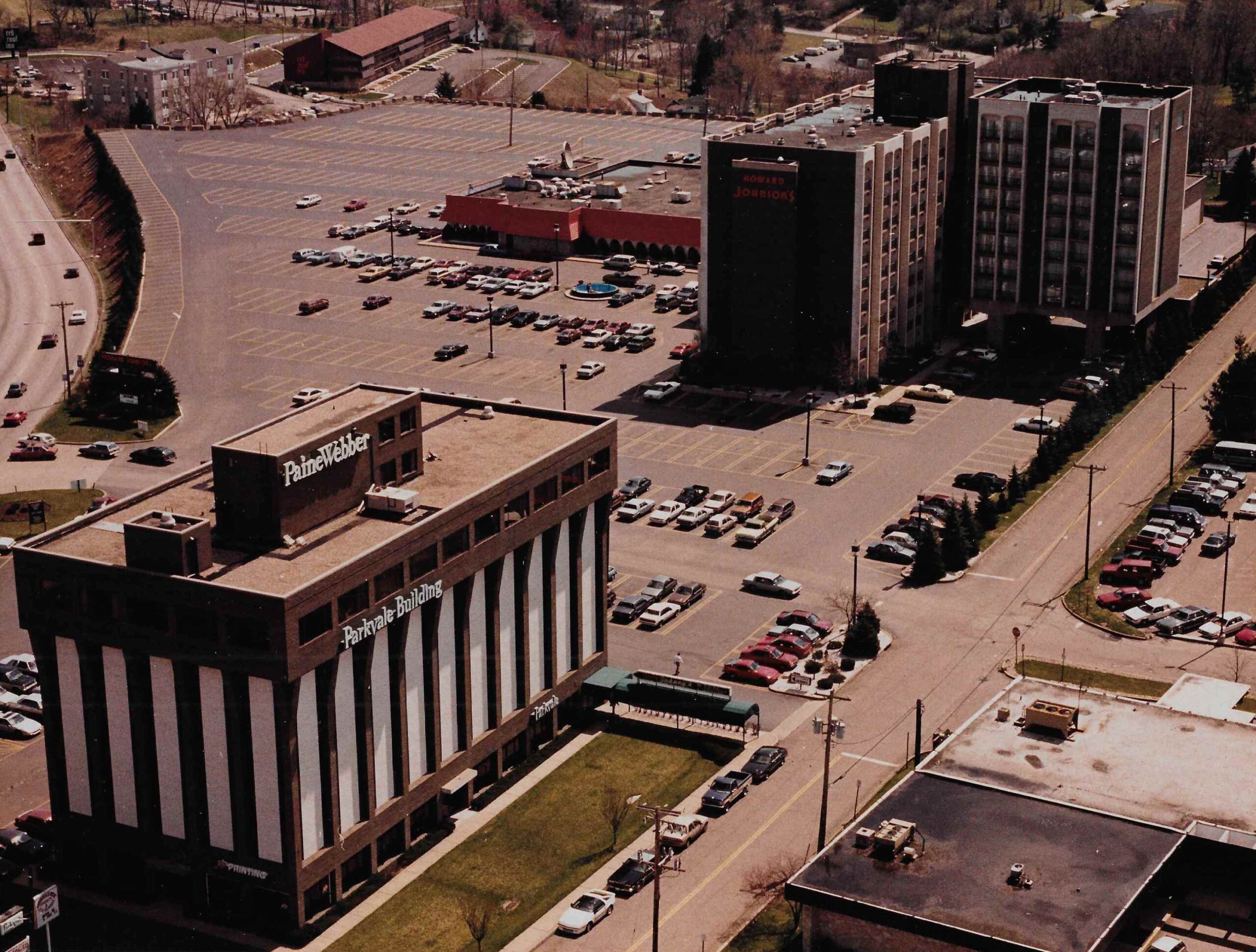 Parkvale building, built and opened in 1974 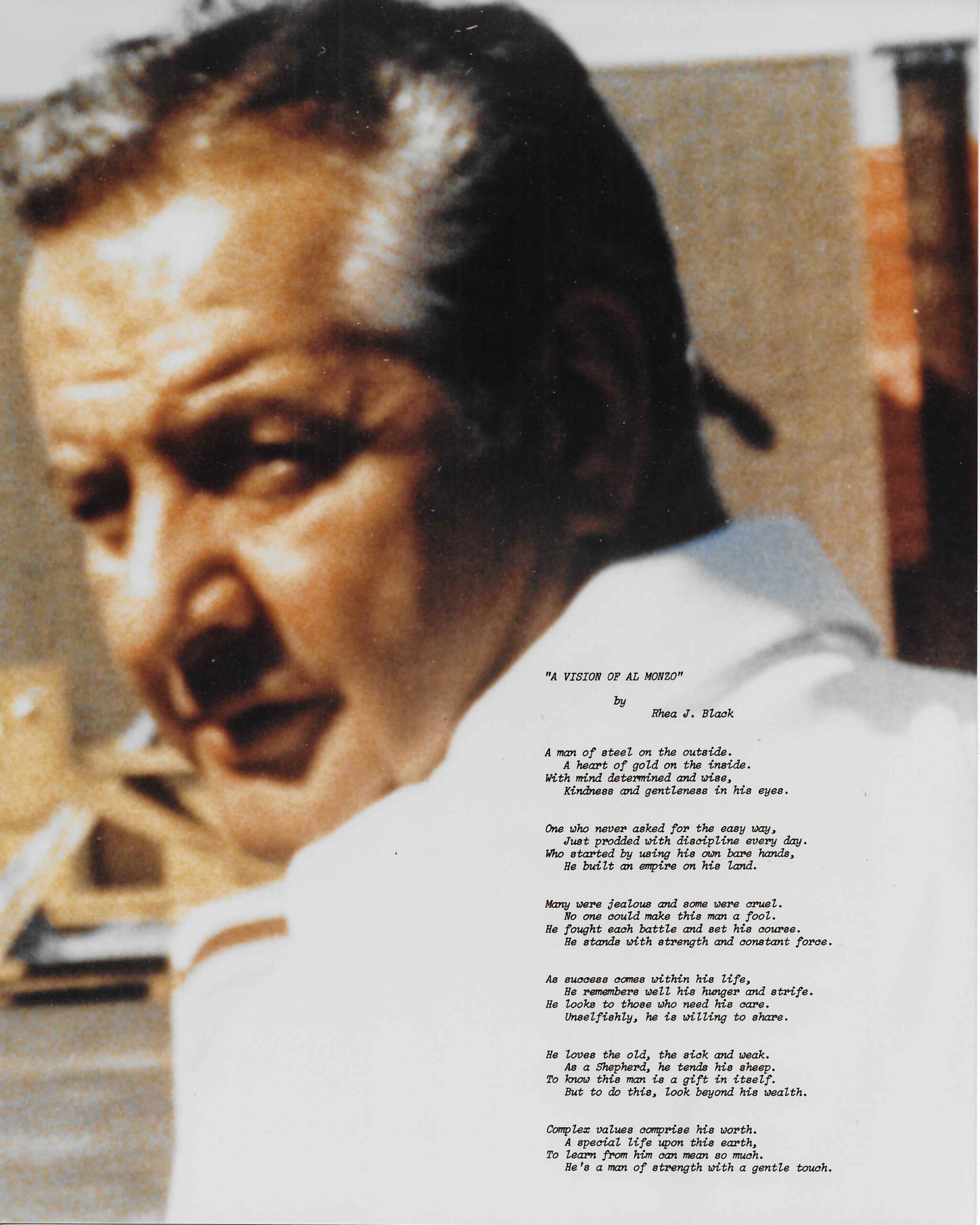 "A Vision of Al Monzo"

by Rhea J. Black
A man of steel on the outside.
A heart of gold on the inside.
With mind determined and wise,
Kindness and gentleness in his eyes.
One who never asked for the easy way,
Just prodded with discipline every day.
Who started by using his own bare hands,
He built an empire on his land.
Many were jealous and some were cruel.
No one could make this man a fool.
He fought each battle and set his course.
He stands with strength and constant force.
As success comes within his life,
He remembers well his hunger and strife.
He looks to those who need his care.
Unselfishly, he is willing to share.
He loves the old, the sick and weak.
As a Shepherd, he tends his sheep.
To know this man is a gift in itself.
But to do this, look beyond his wealth.
Complex values comprise his worth.
A special life upon this earth,
To learn from him can mean so much.
He's a man of strength with a gentle touch. 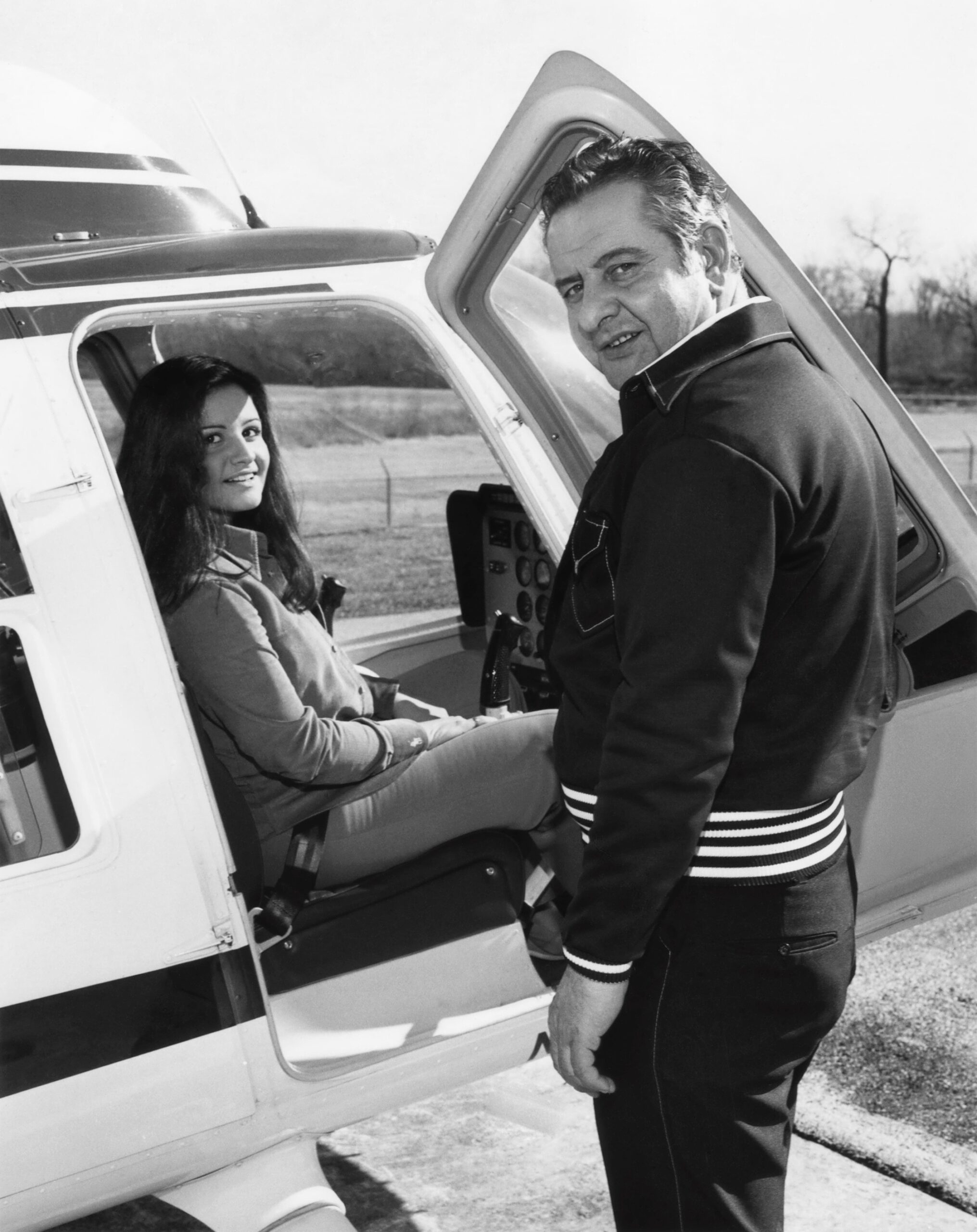 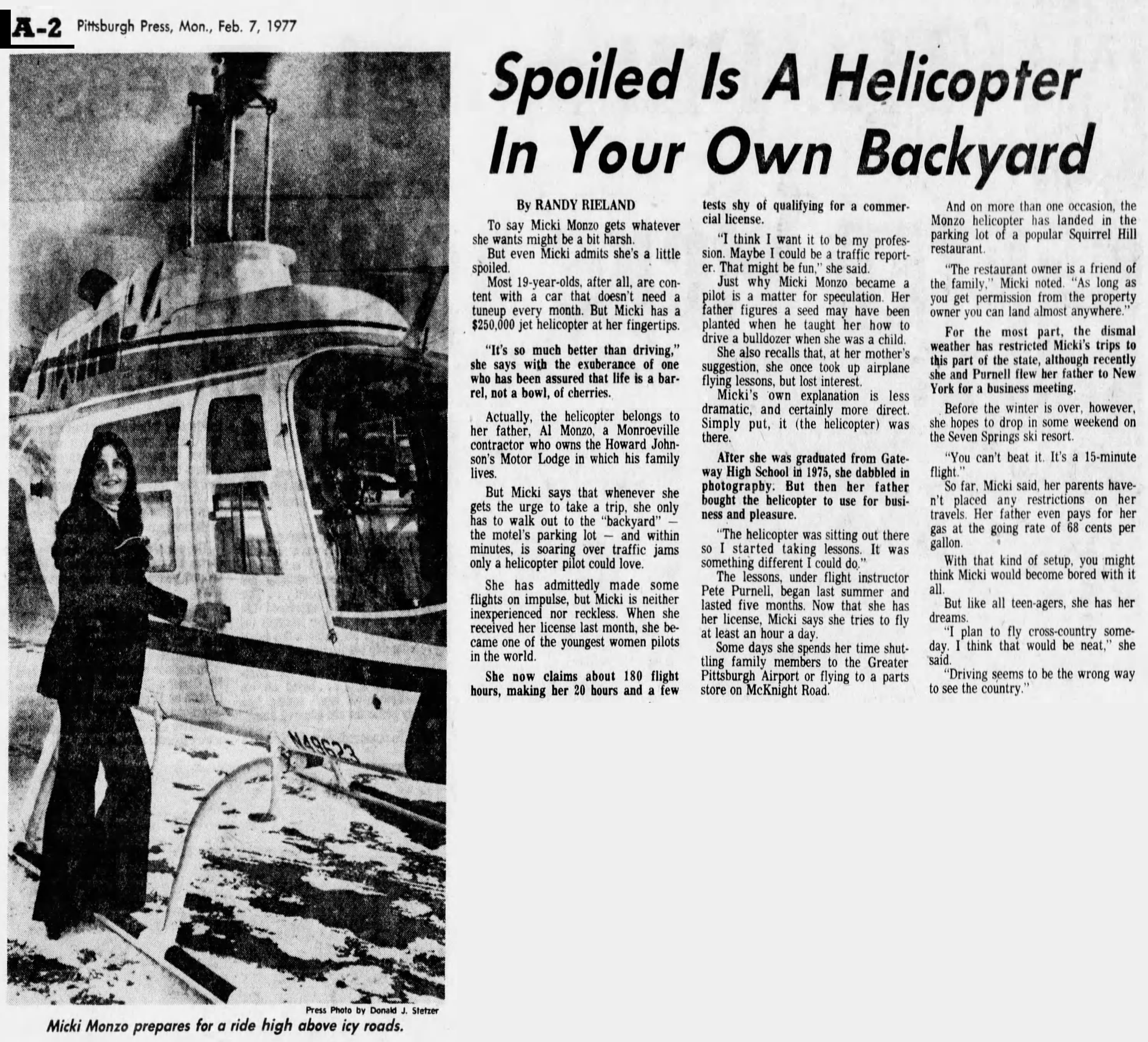 Spoiled Is A Helicopter In Your Own Backyard

To say Micki Monzo gets whatever she wants might be a bit harsh.

But even Micki admits she's a little spoiled.

Most 19-year-olds, after all, are content with a car that doesn't need a tuneup every month. But Micki has a $250,000 jet helicopter at her fingertips. 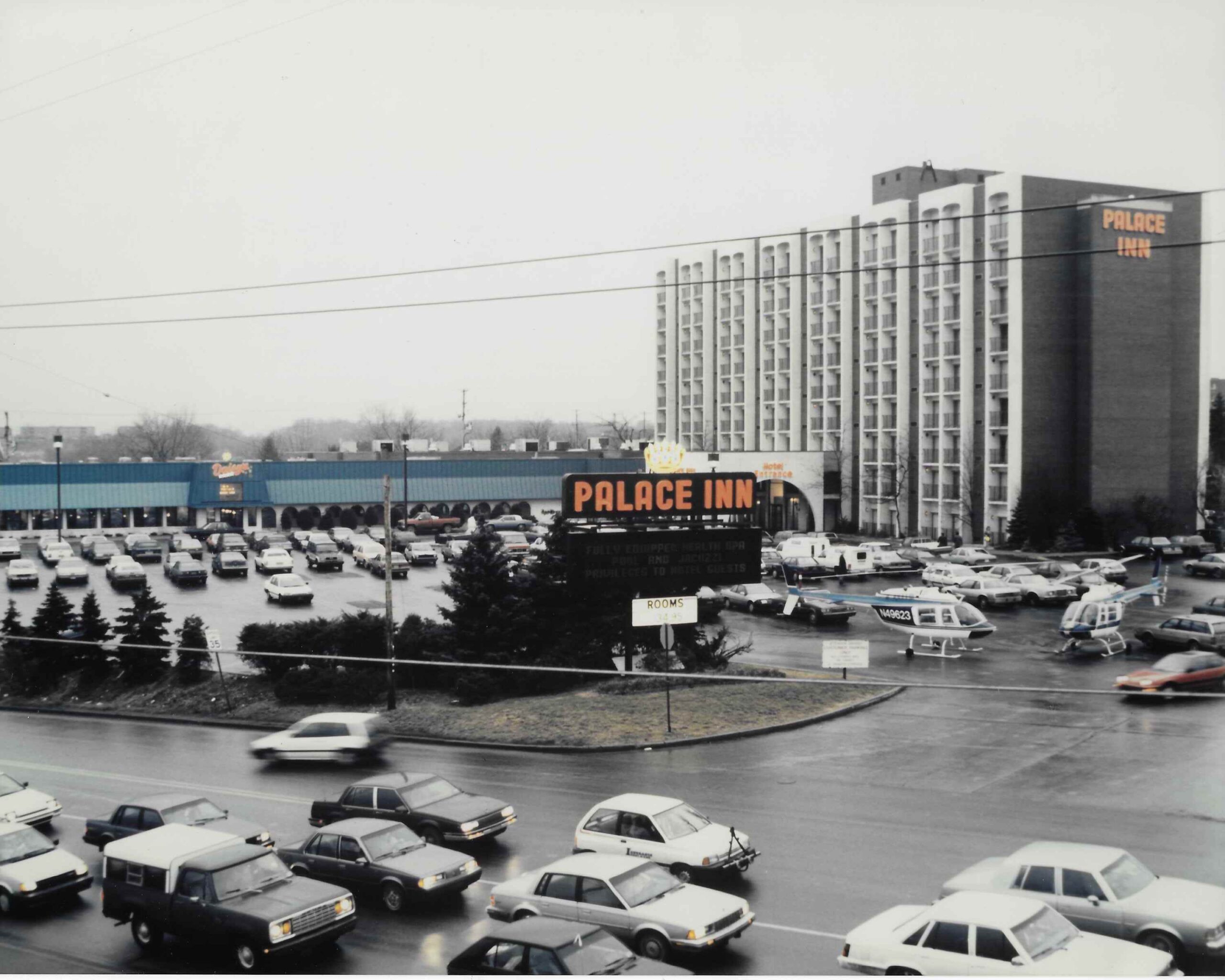 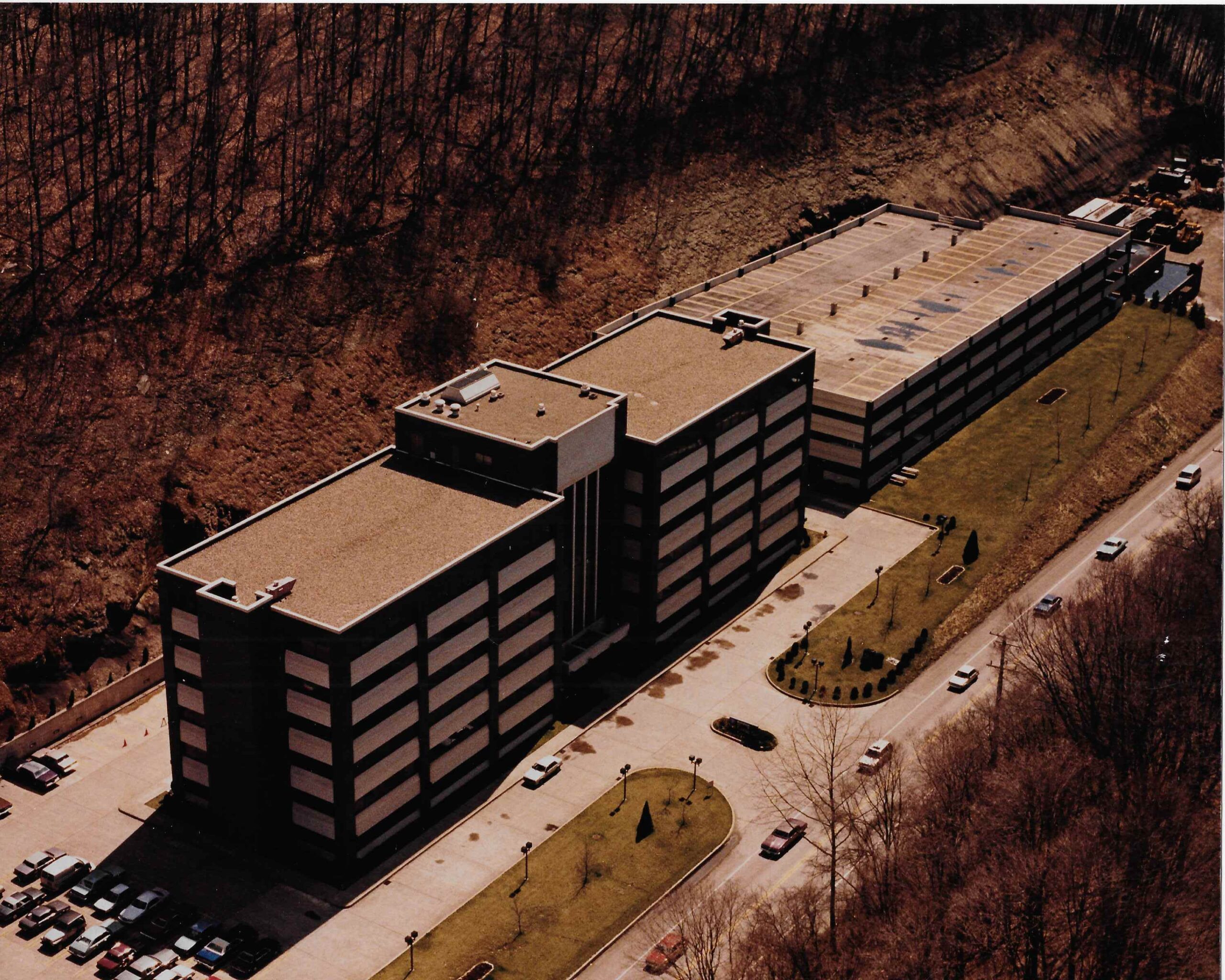 Call him the battler.

If you want to earn his respect, give him a good fight. Knock him down, gouge him a bit, trade punches toe to toe. Then shake his hand... 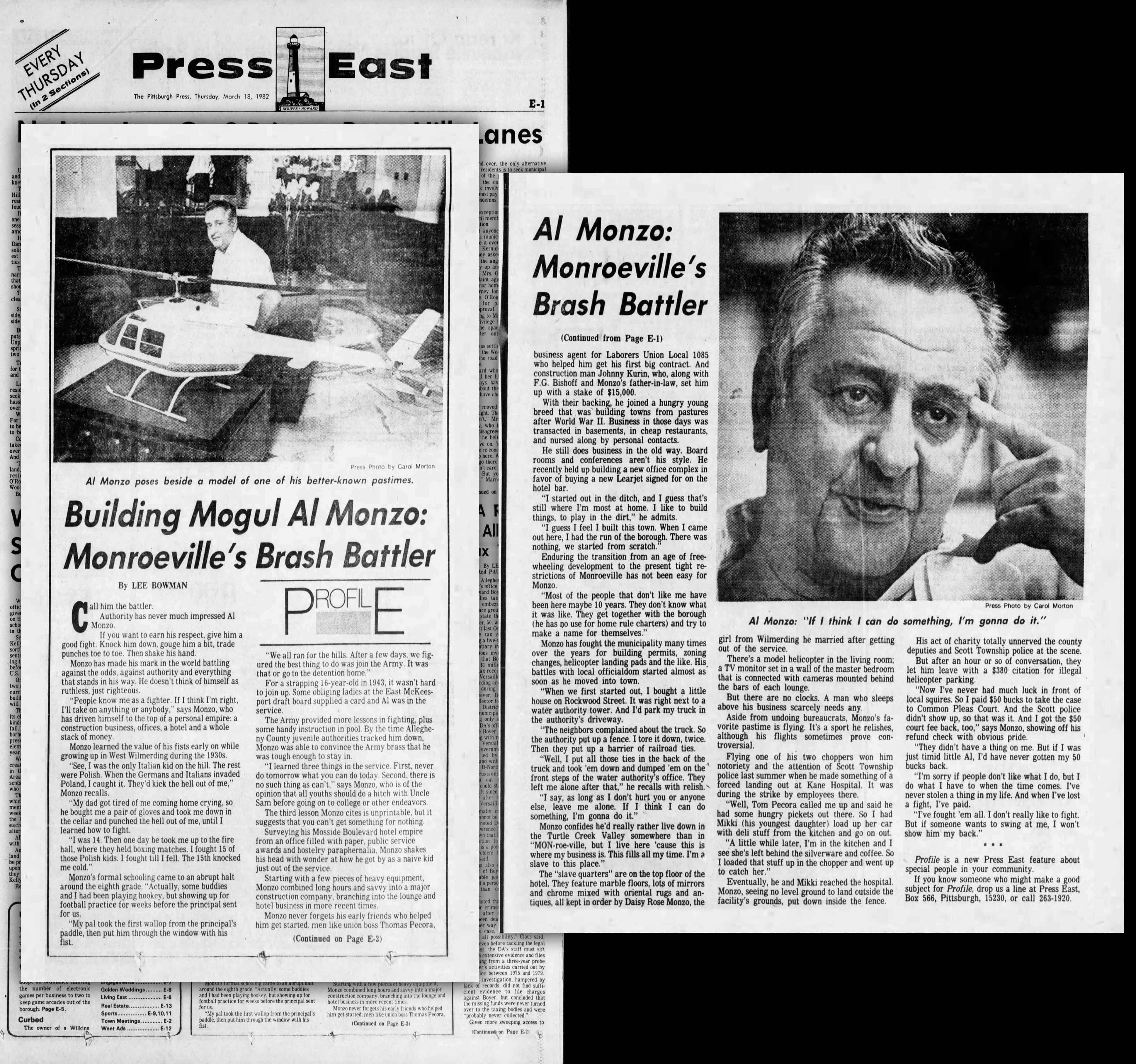 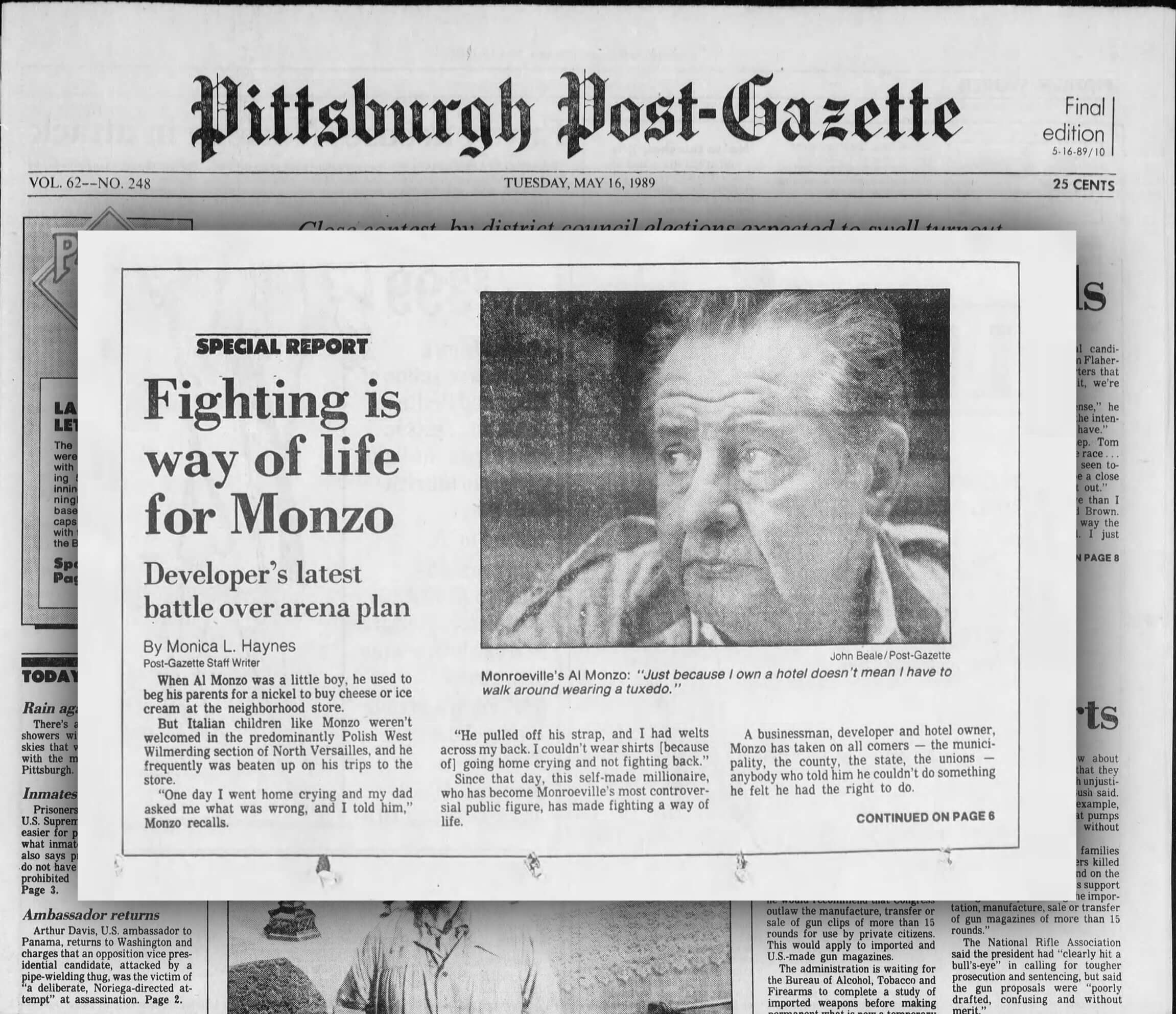 Fighting is way of life for Monzo

When Al Monzo was a little boy, he used to beg his parents for a nickel to buy cheese or ice cream at the neighborhood store.

But Italian children like Monzo weren't welcomed in the predominently Polish West Wilmerding section of North Versailles, and he frequently was beaten up on his trips to the store.

When Mr. Monzo wanted to build something, he just went ahead and did it, not bothering with such trivialities as building permits. When he thought a tax was unfair, he didn’t pay it. He spent much of his half-century as a contractor/developer fighting officials in various levels of government. 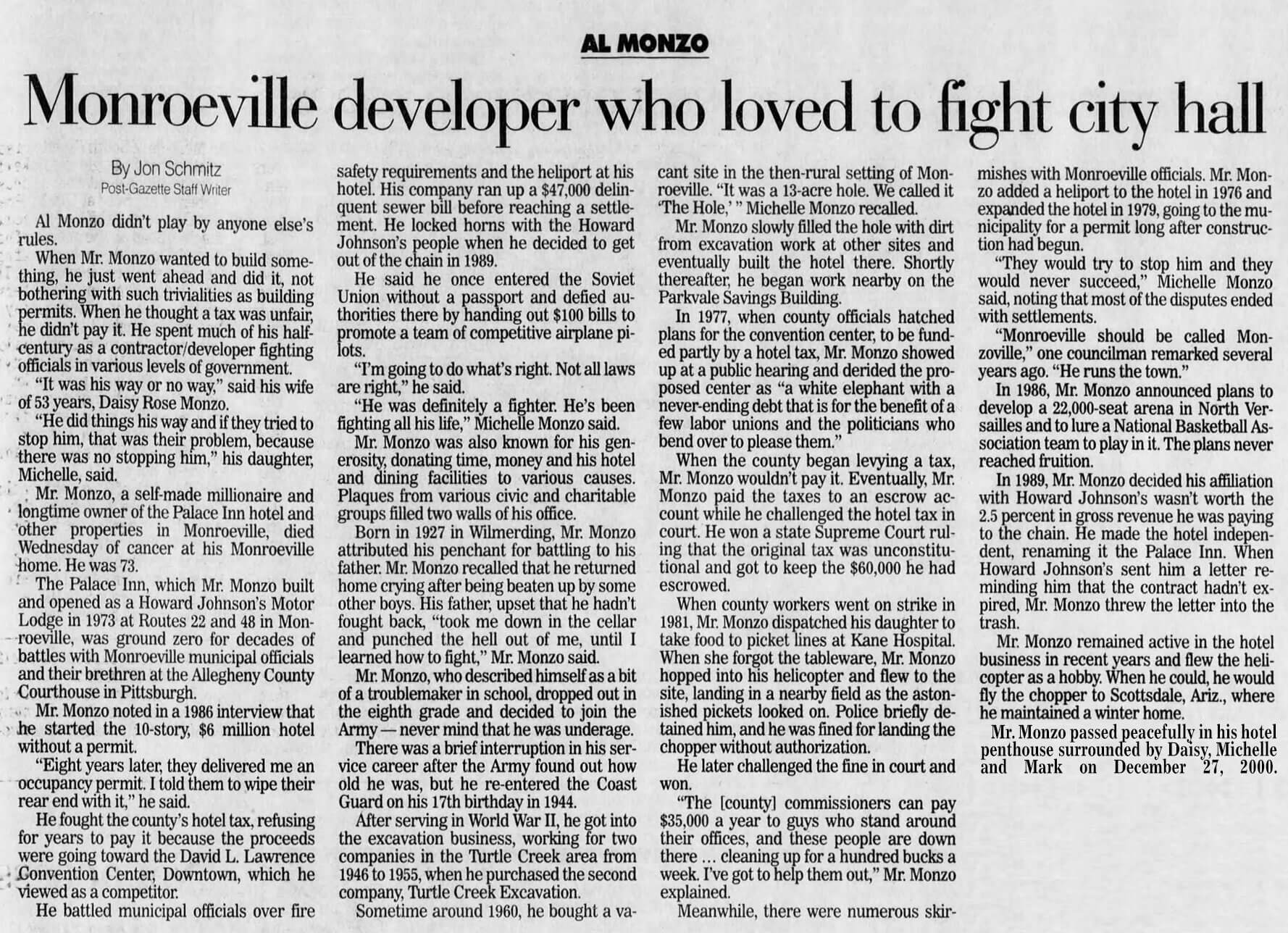 Don’t think of her as gone as her journey has just begun.
Life holds so many facets and this earth is only one.

Just think of her as resting from the sorrow and tears,
in a place of warmth and comfort,
where there are no days, months or years.

Think of how she must be wishing that we could know today,
that one day nothing but our sadness will pass away.

Remember her as still alive in the hearts of those she loved,
and shed not tears as her heart was filled with love from each and every one of you.

She beams with light and love from above for she knows nothing can ever be lost if there is love.

To our dearest friends and relatives

A sincere heartfelt thank you for all of your support, caring and kindness during our recent loss of Daisy Monzo. As you can all imagine, this loss was profound in numerous ways. The support you showed is a clear indication of the love, respect and true appreciation you had for Daisy Monzo, and the incredible human she was to so many she touched. Your loving support made a huge difference in helping us to get through this most difficult time - your kindness and supportive actions will always be remembered and cherished.

Much love to you!